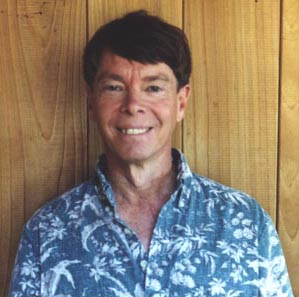 Richard Hey is a marine geophysicist who studies the processes involved in seafloor spreading, one of the fundamental elements of plate tectonics. His early work explained the tectonic evolution of the Galapagos area, showing how small ridge jumps resolved the geometric arguments that had seemed to invalidate the hotspot hypothesis in this area. Later he showed that the ridge jumps occurred in systematic patterns that led him to the propagating rift hypothesis for how seafloor spreading geometry is rearranged. This hypothesis provided the explanation for the oblique offsets first observed in the Juan de Fuca area where magnetic stripes on the seafloor were discovered. These offsets were previously interpreted as faults, but he showed that no relative motion ever occurred along them, and that they are instead “pseudofaults” that bound the new propagating rift lithosphere. Later he and others showed that rift propagation on a much larger scale was a fundamental part of microplate tectonics along the fastest spreading part of the global seafloor spreading system as well as the possible proto-microplate between the Easter and Juan Fernandez microplates. This body of work, described in more detail here, resulted in his election as a Fellow of both the American Geophysical Union and the Geological Society of America.

His current research, in collaboration with Fernando Martinez and Ármann Höskuldsson, is focused on the seafloor spreading reorganizations south of Iceland where transform faults were first created and then progressively eliminated along the Reykjanes Ridge. This work has involved numerous oceanographic expeditions and indicates that “top-down” seafloor spreading processes provide a better explanation than “bottom-up” pulsing Iceland plume models for these dramatic reorganizations.

His research, mostly funded by NSF, has involved 40 oceanographic expeditions, usually as Chief or Co-Chief Scientist. He teaches an undergraduate/graduate level course in plate tectonics (ERTH444).