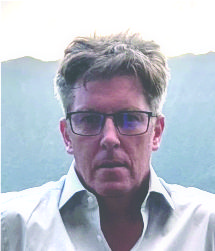 Robert Wright conducts research into how satellites in Earth orbit can be used to measure volcanic activity from space. Using sensors flown in both low Earth and geostationary orbit he has developed techniques to calculate the temperatures, cooling rates, and effusion rate of active lava flows and lava domes, developed computer models that predict lava flow hazards, and spectroscopic techniques for measuring the composition of gases that volcanoes emit. He is PI for the MODVOLC project, which uses sensors on satellites to monitor for eruptions at every volcano on Earth, a system that allows anyone to monitor Earth’s volcanic activity in near-real-time using the Internet, (http://modis.higp.hawaii.edu).

He has also led NASA instrument development projects, prototyping hyperspectral thermal infrared spectrometers for future space flight. These have included the Thermal Hyperspectral Imager (THI), the Thermal InfraRed Compact Imaging Spectrometer (TIRCIS), and the Hyperspectral Thermal Imager (HyTI). HyTI, a 6U Cube Satellite, will be launched into a 400 km orbit from the International Space Station in 2021.